How do I import my email list into Prefinery?

If you already have a list of email addresses, you can import them into Prefinery. Here's how:

From your project dashboard, navigate to Users. In the Users page, click on the Import button. 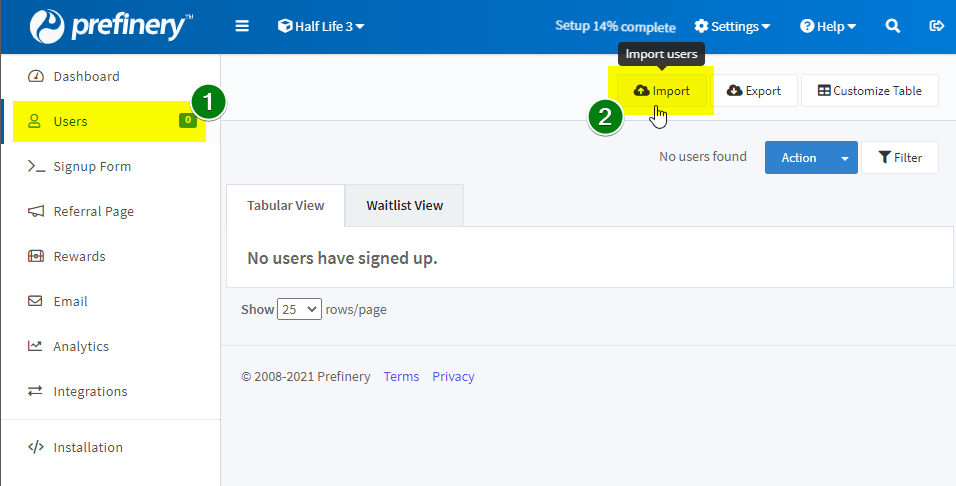 In the  Import Users page, you can click on the Download CSV Template button in the upper-right corner to have a template with preset headers you can use. You can then just delete the single row of dummy data in there and paste in your own. Alternatively, you can edit your original spreadsheet and make sure to include the correct header values before importing.

As for the Status column. if you are moving to Prefinery from another system and want to preserve the original signup timestamp for users who have already joined your waitlist, then you can set all of your users' Status to applied then include an Applied At column header to your CSV file where their signup timestamps are at.

If you want to email users for when they get imported, you'll want to edit the default emails that gets sent to them.

As describe here, when you import a new user into Prefinery that does not already exist, they will first pass through the imported status, even if you have specified that they be assigned a specific status. For example, if you import a user into the applied status, then they will be created with imported as the initial status and then be immediately moved to the applied status. This means that they will fire both the "is imported" and "applies" email triggers.

Some of the emails sent may mention to the user their current position in the waitlist or provide them a link to the referral page where they can see that information. If you want to artificially inflate the numbers of your waitlist, you can navigate to Referral Page > Settings and set your Waitlist Starting Position to a big number instead of the default 1. 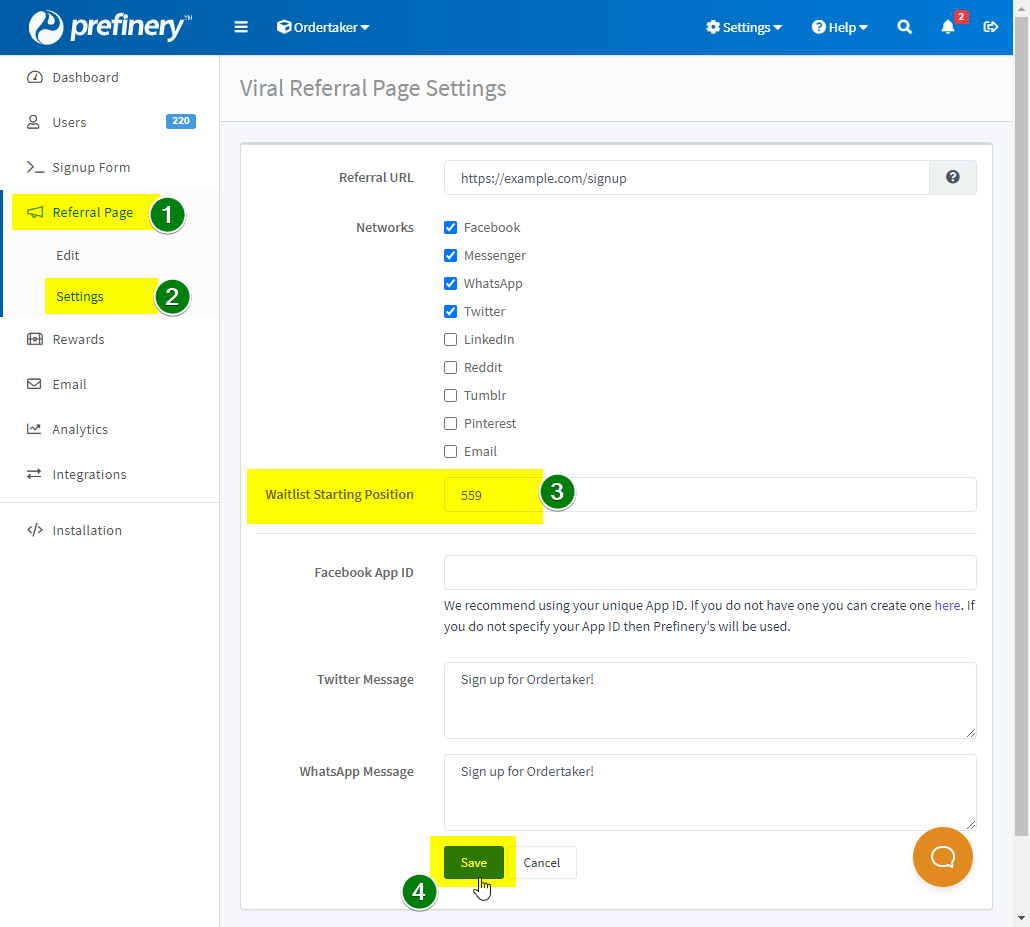 This makes it so that the imported users will "add up" to the starting position instead of being ranked starting from the default 1st position. 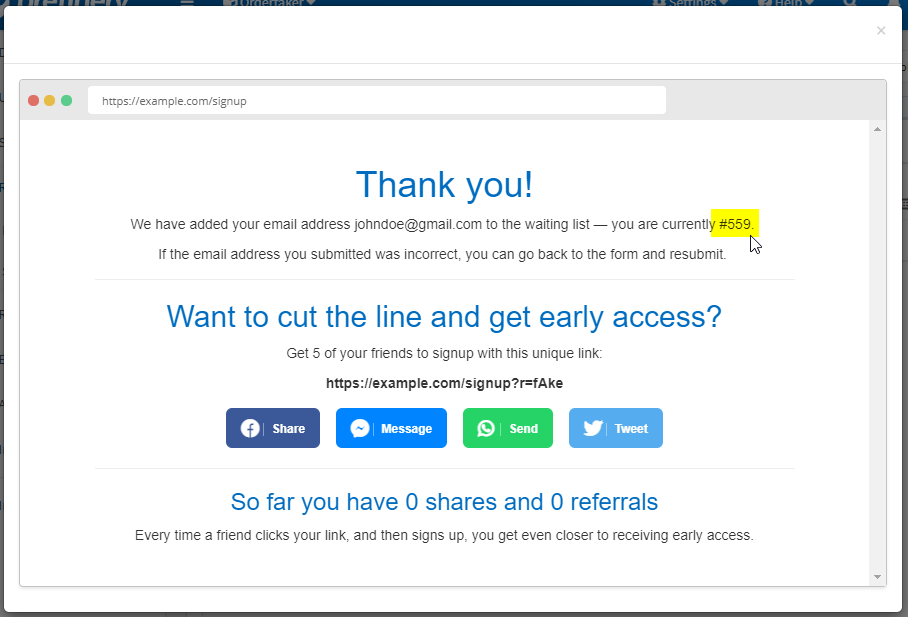 We recommend that you try importing using a test CSV file with only one sample user entry to make sure that everything works the way you want it to.

Once your actual CSV is ready for importing, click on the Choose file button to select your CSV. You may also want to tick the checkboxes for not sending emails when importing as well as confirmation that the imported person has already given you consent to be included in the list. Click Import Users when ready. 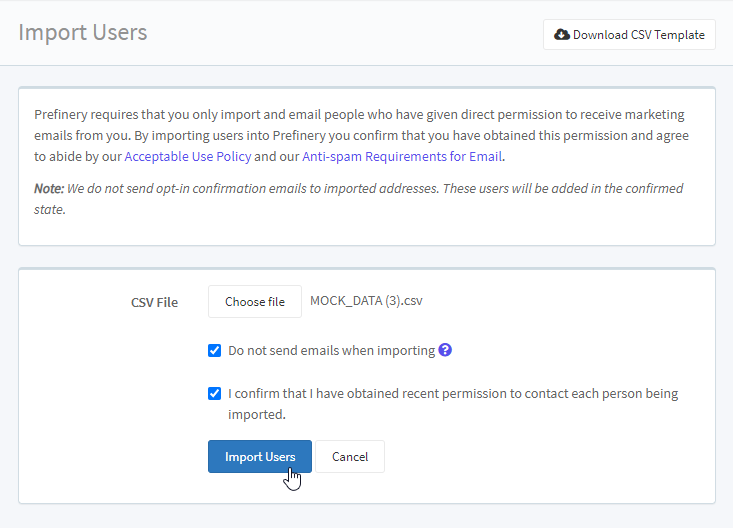 It usually just takes a few seconds for the importing process to finish (it runs in the background so you can do other things on your dashboard), up to a few minutes to very large data sets.

Do I need permission to import and email people?

Yes! Prefinery requires that you only import and email people who have given direct permission to receive marketing emails from you, or have purchased an item from you within the past 12 months and consented to receive emails at the time of purchase. By importing users into Prefinery you confirm that you have legally obtained this permission and agree to abide by our Acceptable Use Policy and our Anti-spam Requirements for Email.

What is the file format of the import file?

Prefinery lets you import a spreadsheet file in the CSV (comma separated values) format. Most popular spreadsheet applications let you export your file as a .csv file.

What information can I import?

Your CSV file must include a header row, where you can use the following column header values:

What status are imported given?

The default status, if one is not provided, is  imported. You can read more about Prefinery statuses, here.

Are emails and webhooks triggered?

Yes. All emails and webhooks associated with the user's status will fire. You can skip triggering emails by checking the Do not send emails box when performing the import.

If you import a user into the imported status, then any emails associated with the "is imported" trigger will be sent and the tester_created and tester_imported webhooks will be sent.

If you import a user into the  applied status, then any emails associated with the "is imported" and "applies" triggers will be sent and the tester_created, tester_imported, and tester_applied webhooks will be sent.

What happens if an imported user already exists?

Imports are performed as a merge and can be used to update existing users. You can either update their profile information, or change their status. If changing status, then the corresponding emails and webhooks will be sent.

For example, if you want to invite users in bulk, you could export your existing list, edit the csv export file to only include the email and status columns, change all the status columns to invited, and then import the file. The result is that each user would be moved the the invited status.

What is the format for timestamp columns?

If you are moving to Prefinery from another system and want to preserve the original signup timestamp for users who have already joined your waitlist, then you can add the applied at column to your CSV file.

How many users can I import at once?

The maximum number of users you can import at a time is 10,000. Also, the imported csv file must be less than 4MB.

How can we help?