What is a suspected cheater?

Prefinery's fraud protection system is your first line of defense against fraudulent users. For those though that do make it into your campaign, if at a later point we are 100% sure that they are fraudulent then they will be suspended. If we only suspect that they are fraudulent, but are not 100% sure, then they will be simply flagged as a  suspected cheater as indicated on their profile/listing in your Users database so you can review them.

There are a number of behaviors which may flag a person as a suspected cheater, and that flag may be toggled on or off as the person does things which change our level of suspicion. Some behaviors are:

Besides adding reCaptcha, and requiring your users to confirm opt-in via email to mitigate spam, your project’s fraud protection settings can also be fine-tuned to better suit your use case (e.g. limit referrals per IP or block users from a certain domain). When those rules are met, the person is blocked from signing up. They never even make it into your campaign.

What to do with a suspected cheater

In the end, being flagged as a suspected cheater has no affect on the user. They won't know that they are flagged as such and it in no way changes how they interact with your campaign. It's still up to you to decide on what you want to do with this user.

In some cases, suspected cheaters can be harmful to your project by causing it to generate a high bounce rate. Oftentimes, some cheaters will attempt to use invalid email addresses to sign up on their own referrals links to boost their referrals. Those signups would then result into bounces due to those mailboxes being non-existent. This means suspending those that you deemed cheating will prevent them from further attempting to refer more invalid users to themselves, curbing the unnecessary increase in bounce rate.

How to find and review suspected cheaters

Unless you're encountering a bounce rate issue, the easiest and quickest way to review suspected cheaters is through the Waitlist/Leaderboard View in your project's Users page. You'll want to make sure top users aren't cheaters as they're the ones that bring in the most referrals.

One other method to get a complete list of all suspected cheaters is to use the search filter in the Tabular View like as shown below:

The user's profile will also be tagged with Suspected Cheater like as shown below:

You can then check each user's profile and see if they have a suspicious amount of either unconfirmed or suspended referrals/invitees (even more so if these are higher than the number of confirmed referrals). The example below shows the user has 500 confirmed referrals, but the other 3000 referrals are suspended users which is an absolute red flag.

If that 3000 are just unconfirmed referrals, you'll want to make sure first that nothing else is wrong with your project by making sure your double opt-in email is active and you have a working sender address.

You can also review other parts of the users' profiles, and if a common IP address and/or custom email address domain is being used by multiple users and their suspended/unconfirmed referrals, you can enter them into the Email and/or IP Blocklists to stop them from signing more up. The same goes for when they they from a specific country which you don't need audience from anyways - you can add them in the Country Blocklist.

Once you've deemed the user as having cheated, you can then suspend them. 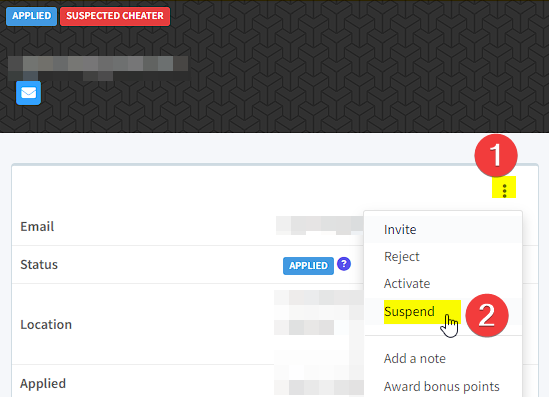