What Causes a User to be Suspended?

A user will automatically be suspended if any of your campaign emails sent to them results in a hard bounce or a spam complaint.

A hard bounce means that the email address does not exist. An email can hard bounce at any time, even for a previously working address, for example if that person were to close their email account. Even if you ran the user's address through email validation services, they are not always very accurate and may give you misleading results.

Users can also be manually suspended through the dashboard UI like as follows - through the Users page's Action menu...

...or through the user's profile page: 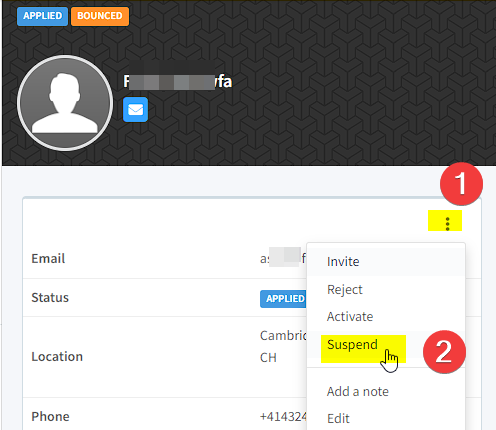 The testers#update API call also supports the suspended status if you prefer to suspend the user from your end or through a 3rd-party integration tool.

What Happens When a User is Suspended

When a user is suspended, email delivery and social sharing via this user's referral link is disabled and and any existing Shares or Referrals are not counted.

How to Unsuspend a User

Unsuspending users will revert their status back to before they got suspended. For example, if they were previously in the applied status prior to suspension, they'll return to that status when unsuspended.

In nearly all cases, you don't want to unsuspend users that were automatically suspended. Doing so will only result in potentially attempting to send them more emails which will increase your spam/bounce rates.

Below are exceptions though where you may need to unsuspend a user:

Considering the above-listed cases, here are ways to unsuspend users:

If a user is suspended in error you can Unsuspend them from their profile page. 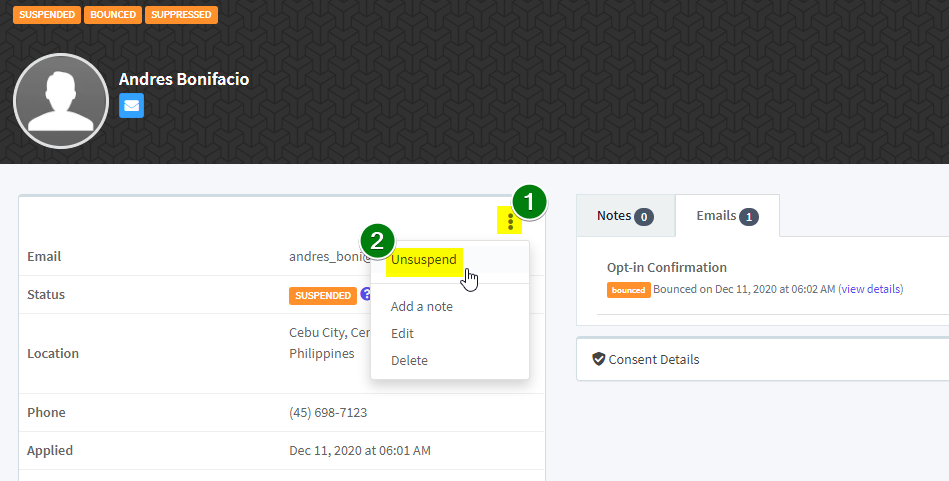 In the case where you have to unsuspend a lot of users in bulk, you can re-import those users (without deleting them from your project) with the status unsuspended to update them and revert their status.

To do so, from your project dashboard, navigate to the  Users page and use the filter to only access users with "Status is Suspended" and "Bounced? is false" like as shown below. After applying the filter and without selecting any user (doing so means any action taken will apply to all of the users that match the filter) click on the Action button then Export. 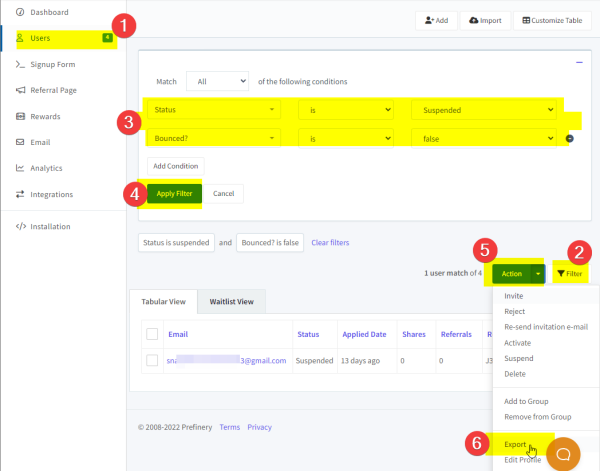 Open and edit the exported CSV file and delete all columns except Email and Status. Then, change the status of all users from suspended to unsuspended. Save your changes, making sure that the resaved file is still in the correct, supported CSV format.

Back in your project dashboard, go to Users > Import to proceed with importing the edited CSV file.

Like how you can use the testers#update API call to suspend users, it also supports the unsuspended status if you prefer to unsuspend the user from your end or through a 3rd-party integration tool.

You would also want to check Email > Suppressions and search for that user's address. If a suppression exists for them, you would want to click the Reactivate button to remove that address from the suppression list so email delivery is re-enabled for the user.

While Suppressions and Suspensions seem similar, they are not exactly the same. In both cases email delivery is blocked, but a Suspension goes even further by disabling the referral link and removes any existing shares and referrals that may be attributed to that user. Additionally, while a user can be unsuspended, they may not be able to be removed from the suppression list. For example, some suppressions (spam complaints) can not be re-activated. So, even if the user is unsuspended, they will never receive any future emails.